You can watch drama serial Sitam at 7:00 PM only on Hum TV.

The Story of the drama serial Sitam revolves around Feriha (Nawal Saeed), Aysha (Aashi), and Shayan (Usama Khan). Shayan and Aashi love each other but Shayan refuses to marry Aashi. Due to the family’s pressure, Shayan leaves Aashi and marries Feriha.

After marriage Feriha comes to know that Shayan married her because of his sister who is Feriha’s sister-in-law. This watta Satta marriage was just to keep Shayan’s sister happy in her life. Shayan does not behave well with Feriha. On other hand, Aashi is engaged to Ali but she is not happy because she still loves Shayan.

Drama serial Sitam’s story is a love triangle and about issues in the life of Feriha, she faces after the wedding. But she does not lose hope and faces everything with courage. Watch the drama serial Sitam on  Hum TV to know about what would happen to Aashi and Feriha next.

Here is the teaser of Hum TV drama Sitam: 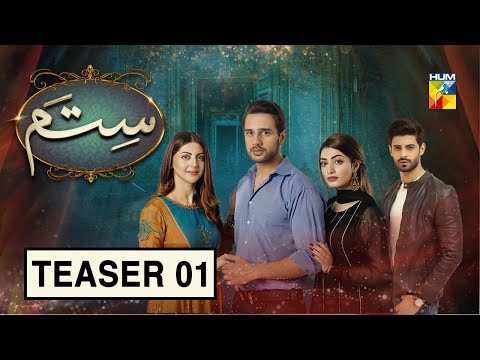